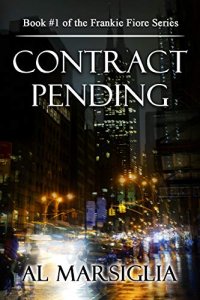 Al Marsiglia
Take a walk on the Darkside of life. Feel it! Smell it! Taste it! A tale of the evolution of Frankie Fiore, from a young man working in his father's shoe store, to a hoodlum working the streets of New York.
Mystery & Thriller
$0.00
$1.99
Amazon

Al Marsiglia's books, "Contract Pending" and 'By Hook or BY Crook" have caused a stir in the thriller/crime novel/mystery segment of the book reading public, generating mostly 5 star revues on Amazon. The mafia-flavored bent of his stories have a genuine feel to them and for good reason. Although he personally was never in the "life" himself, Al grew up in the Bronx New York of the 1940's and 50's, in an era when organized crime was flourishing all around him. The characters in his books are based on actual people and friends he grew up with. He was privy to their humor, their fears, and their tears and it shows in his stories. He recently completed a third book, Trupenny. A tale of western redemption and biracial romance. He has also recently published two children's picture books, all available on Amazon. Born in the Bronx NY., Al Marsiglia has had several successful careers, including actor, real estate broker, over-the-road driver, restauranteur, hypnotherapist and author. He has written three screenplays, two of which garnered semi-finalist status in prestigious competitions. His first novel, Contract Pending was originally conceived as a screenplay and can be found on Amazon.com. Al currently lives in North Carolina with his wife Rosemarie.