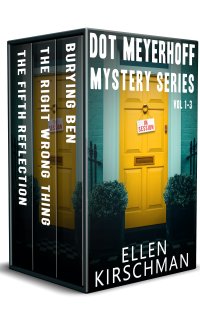 Ellen Kirschman
As the local police department’s new psychologist, Dr. Dot Meyerhoff is up to her ears in testosterone, cynicism, and brittle gallows humor. She quickly learns that counseling cops isn’t easy, partly because they are uncommunicative and contemptuous of therapy. Yet it’s also obvious that they and their families deal with enormous pain every day.
Mystery & Thriller
$0.00
$6.99
Amazon

Dr. Dot Meyerhoff, my protagonist, is a police psychologist, as am I. She's been hired to counsel cops, but she cannot resist getting involved in the crimes they investigate. Too dedicated for her own good, she never gives up and will risk everything, even her life, to see justice done for her clients. My 30-year career as a police psychologist is less dramatic. I have never done some of things Dot has done: breaking and entering, impersonating a public official, and assault with a deadly weapon. I would have lost my license. I started out writing non-fiction. At some point, I got tired of reality and thought it would be easier to make things up. It isn't. It's harder, but more fun. Creating characters inspired by real people gives me the opportunity for payback. I get to throw jabs at cops who treated me badly, psychology colleagues who did more harm than good, and two of my ex-husbands. I still write non-fiction, updating editions of I Love a Cop: What Police Families Need to Know, I Love a Fire Fighter: What the Family Needs to Know, and (with co-authors Mark Kamena and Joel Fay) promoting Counseling Cops: What Clinicians Need to Know. I'm grateful to have been given awards by the American Psychological Association and the California Psychological Association for my contributions to police and public safety psychology. I also blog with Psychology Today and write an occasional newsletter.