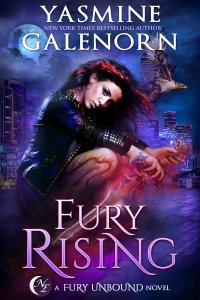 Yasmine Galenorn
An acolyte pledged to the goddess Hecate, Kaeleen Donovan—known as Fury—must hunt down Abominations coming in off the World Tree in a post-apocalyptic world.
Fantasy
$0.00
$0.00
Amazon
B&N
Kobo
Apple
Google

New York Times, USA TODAY, and Publisher’s Weekly bestselling author Yasmine Galenorn has been telling stories since before she could first hold a pencil. In April 2012, she won a Career Achievement Award in Urban Fantasy at the Romantic Times Convention. She has over 75 books on the shelves and writes paranormal women’s fiction, urban fantasy, paranormal mysteries, paranormal romance, and a mix of all of these. Her series include: the Moonshadow Bay Series, the Wild Hunt Series, the Chintz ‘n China Series, the Bewitching Bedlam Series, the Fury Unbound Series, the Indigo Court Series, the Otherworld Series, as well as metaphysical nonfiction books. She wrote for traditional publishers for twenty years until 2016, when she moved into being an indie author to give herself more freedom. Yasmine walks an eclectic path and considers her life to be a blend of teacups and tattoos–the former in her china hutch, the latter on her skin–she’s heavily inked. She lives in the Seattle area with her husband and four cats, and loves the gloom and the rain.