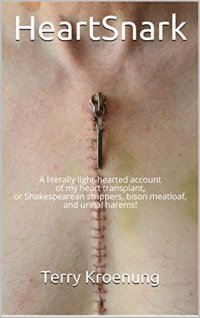 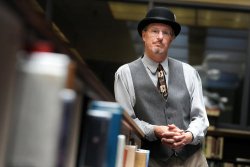 Terry Kroenung has leapt out of perfectly functioning U.S. Army aircraft, taught Crips & Bloods on a wagon train, and been paid actual money to portray both William Shakespeare and Chuck E. Cheese. Oh, a side note: they cut his heart out and threw it away. But at least he got a book out of it (HEARTSNARK). BRIMSTONE AND LILY, the first novel in his Legacy Stone series, started as 'swords-and-sorcery Huck Finn' and went sideways from there. The books include shape-shifting swords, Civil War battles, magic cannonballs, combat pelicans, Captain Nemo's sub, kindly Arab terrorists, swimming trees, cyclopean ogres, 10,000 ancient Greek zombies, lady ninjas, and poop monsters. BRIMSTONE AND LILY won the Bronze Medal in Science-Fiction/Fantasy at the 2010 Independent Publishers Book Awards and was a Colorado Gold Rush contest finalist. An Advanced Actor/Combatant with the Society of American Fight Directors, he has choreographed or performed hundreds of swordfights, from HAMLET to PETER PAN. That’s why his books have such an absurd number of fight scenes. He teaches Bartitsu (Sherlock Holmes' martial art, an actual Victorian discipline), because if you can’t kill someone with an umbrella, are you even civilized? PARAGON OF THE ECCENTRIC, his Steampunk prequel to WAR OF THE WORLDS, won the 2013 Colorado Gold writing contest and the Incite Denver contest for best first sentence (“When a Whitechapel whore waves her tentacles at you, attention must be paid”). He teaches literature in Colorado, supported by his wife Janet and a completely whack-a-doodle basset hound.