Miranda Kate
David wants to find his father & end The Jester's hold on his time, but how does he get The Jester to slip him through again? Going public about The Jester's recruiters does the trick, but now he's the one being recruited to replace The Jester. Find out why David is the perfect candidate for the job in this, Book 2 of The Jester's story.
Science Fiction
$0.00
$5.99
Amazon 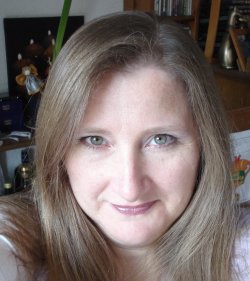 M K started out life wanting to be a film director, but when directing people didn't work, she turned to writing and started directing words instead, and finds them much easier to deal with - most days. Under her pen name Miranda Kate, she has been featured in several Flash Fiction anthologies, and has published two collections, one of dark flash-fiction tales, Mostly Dark, and another of science-fiction stories, Slipping Through, the latter containing a short novella, of which a sequel is forthcoming. M K Boers spent her early childhood in Surrey, in the south of England, and her teens moving round the UK, but currently resides in the Netherlands.