Trevor Jones
Can an elderly wizard, a young priestess, an exiled barbarian, a failed dwarf and a star-elf put aside their differences and work together in time to deal with That Damn Dragon!
Fantasy
$1.99
$4.99
Amazon
B&N
Kobo
Apple 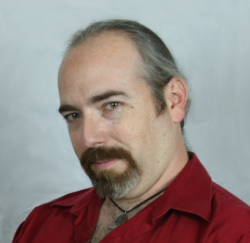 I started writing when given a typewriter at the age of ten. The world of Kinthur was born in 1991 during the start of my journey through college. The first novel, Penta Ka Wa: The Dark Gift started as an oral story told to friends, but as the years passed, the story got longer and came alive, demanding it be put to paper. Inspired by role-playing games (Dungeons & Dragons) and all the influences of the great fantasy writers in the past, the world of Kinthur was born. Over 10,000 years of history have been planned out to be shared and more stories are on the way. Kinthur is filled with dragons, elves, heroes, vampires, gods and more fantastical creatures than you can throw a grimoire at. The Penta Ka Wa series came first, as the character held a special place in games and story alike. The next series, The Adventurers, was born out of one of Penta's chance encounters with a wayward group of travelers. Their appearance was so momentous, they had to have their own series. I make my home in the mountains of Western North Carolina with my partners, my dogs, my cats, my wife's snake, roommates, a possible ghost and the best group of friends a guy could hope for.