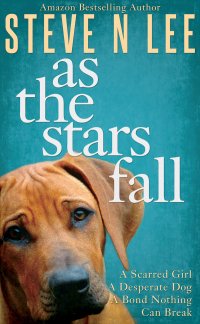 As The Stars Fall

Steve N Lee
A Desperate Dog. A Scarred Girl. A Bond Nothing Can Break. An injured dog trudges the streets, trembling from cold and hunger. Battered by the wind, he searches for his lost family. Then one magical spring morning… Elsewhere, a girl sobs into her pillow. Days once filled with childhood joy now smother her with despair and emptiness. Then one magical spring morning… the dog and the girl meet.
Literary Fiction
$0.99
$4.99
Amazon

Steve N Lee has three passions: anti-heroes, animals, and travel. To date, he's visited 60 countries and has adopted five homeless cats, but he's yet to prowl the streets in the dead of night to beat up bad guys (though he still daydreams about doing so, but who doesn't?). In pursuit of adventure, he's cage-dived with great white sharks, sparred with a monk at a Shaolin temple, and explored exotic locales such as Machu Picchu, Pompeii, and the Great Wall of China. Fortunately, his passions fuel his fiction. He loves to pepper his action-packed thrillers with the exotic places he's explored and the unusual encounters he's experienced, while his dog stories glow with the love and companionship that will warm the heart of any animal lover. He lives in the North of England with his partner, Ania, the great-granddaughter of the 1924 winner of the Nobel Prize for Literature, and two stray black cats who visited their garden one day and liked it so much, they moved into the house. Luckily, they graciously allowed Steve and Ania to carry on living there, even allowing Steve to continue paying the mortgage to give him a sense of purpose. If you don’t read Steve’s books, the cats will not be happy — they like their house so need Steve to keep paying for it!