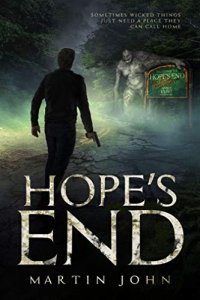 Martin John
The town of Hope's End has been forgotten by the world along with all those trapped within. For almost a decade the evil that lurks within the town has been contained but that could be about to change. A small team, joined by hapless but likeable rookie, Noah Wild, must venture to Hope's End in a desperate attempt to prevent its destruction and possibly the world’s.
Horror
$0.00
$3.50
Amazon 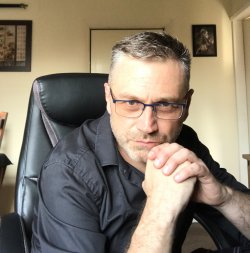 Martin John was born in Birmingham, England in 1970…something. At the age of 10, he moved to South Africa. There, he developed a love for campfire tales of ghosts and goblins but absolutely no love of camping. He spent most of his childhood and teens with his head buried in books written by the masters of horror: Stephen King, Dean Koontz and James Herbert. Although some children would have been mentally scarred by reading these books at such an early age, Martin’s therapist assured him he was messed up long before then. In his twenties, Martin flitted between countries, even doing a small stint in Miami. Although tempted by the idea of being the palest and most unattractive person living in Coconut Grove, he decided to return to England. There, he pursued a career in sales and business development, quickly becoming a slave to the luxuries this lifestyle afforded him… such as food, electricity, and on occasion, warm water. Recently, he walked away from the rat-race to write full-time. Hope’s End is his first novel, which combines his love of horror, action, and quirky sense of humor. Martin lives in the countryside with his family and many animals. When he is not writing, he loves cooking and will shamelessly brag about how amazing his Italian dishes are.